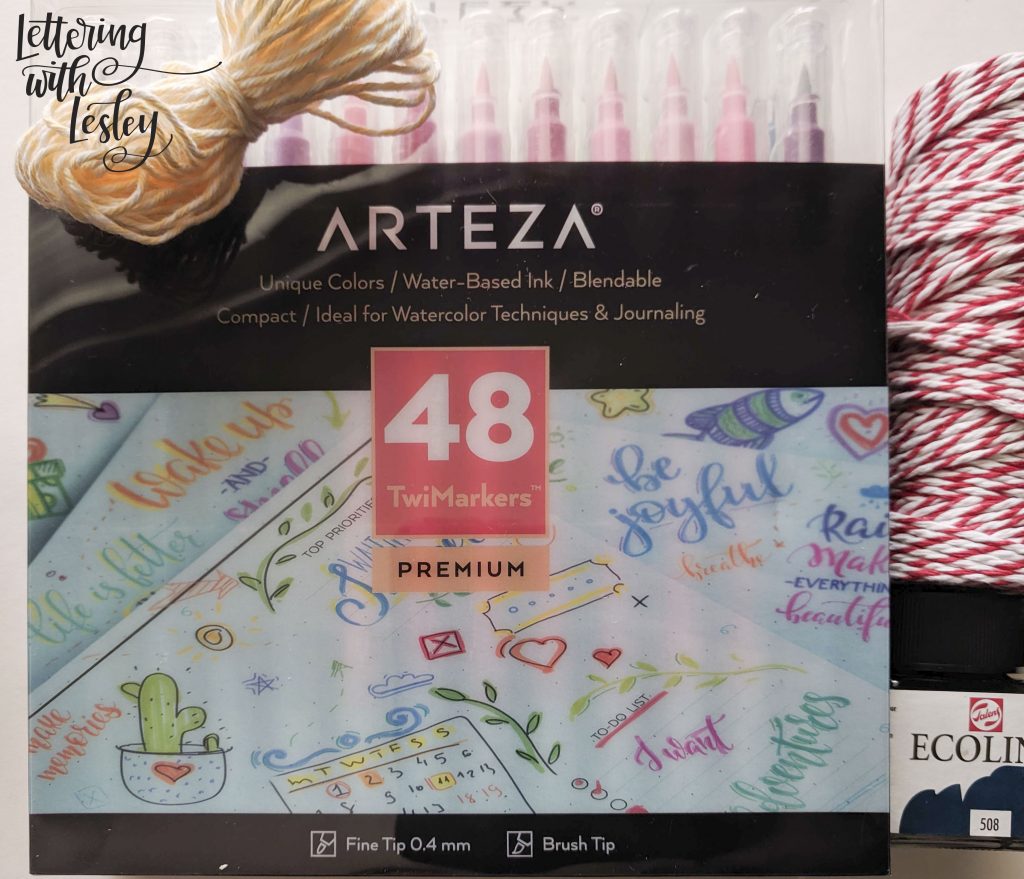 New day, new pens!  And, today, I got a hold of the Arteza TwiMarker pens and I was so excited to check them out.  While perusing Instagram, I saw lots of people creating with them, and I was intrigued because the downstrokes were both really big and then some were narrower.  I couldn’t figure it out – was it a zooming and photography thing or were they that versatile? When I went to Arteza’s site, I was amazed at the number of different art and drawing supplies they had!  There are tons of different types of markers, colored pencils, drawing pads, and more.  I ordered the 48 pack of TwiMarkers and paid about $35 for them – I found a coupon code online too!  They shipped to me for FREE!

So, without further ado, these are my observations and notes about the Arteza TwiMarkers!

The pens are relatively thin – think about a pencil – and are dual ended with a wide brush tip and a thinner tip.  The brush tip end is definitely on the large size. The nib is long, but well mounted in the body.  I didn’t find it really wiggly or hard to control.  Because of its nib length, it is very pressure sensitive. 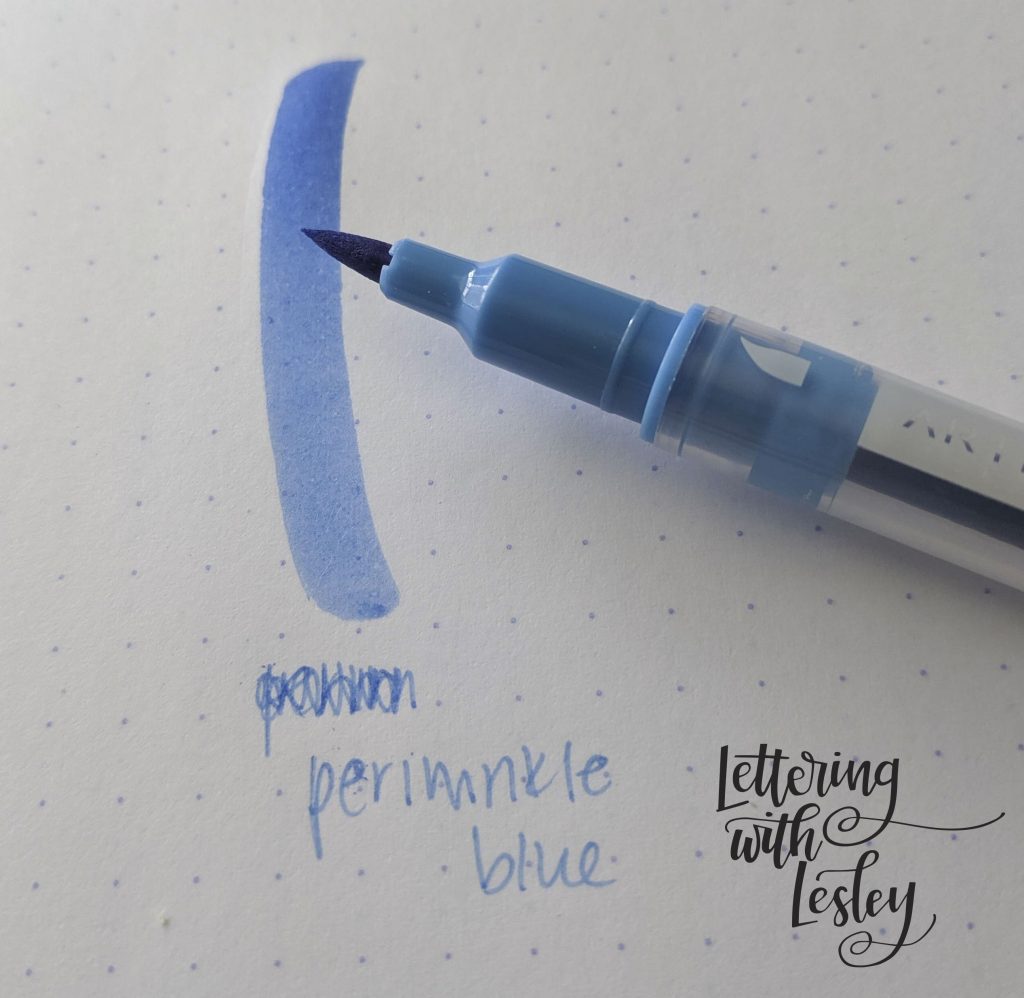 The large nib is sensitive to pressure, which is great for creating larger pieces.  However, because they are sensitive, I found it a little challenging to get a consistent width – especially when I was switching pens.  It was really hard to be consistent when picking up the pens and putting them back down.

One of my pen pet peeves is a fraying nib with pressure.  I like a solid nib, not something that will spread like a paintbrush.  My favorites are something like a Crayola fat marker or a Tombow Dual brush.  I found that these spread a little bit with very heavy pressure.  My issue with the paintbrush fraying is that I have a hard time getting a crisp line and sharp edges, especially because I am pushing my pen rather than pulling.

The other side of the pen is a bit crazier!  It can be used as a monoline and it is super super super thin!  I really liked how sharp and precise the lines were from this side of the pen.  I was also super pleased to see that the inks are the same color and saturation.  For me, that means that I can touch up any fraying or crooked edges without it being noticeable.    You can also use heavier pressure and make this side a VERY small brush tip!  It is nice to have the option to create smaller brush letters with these too. 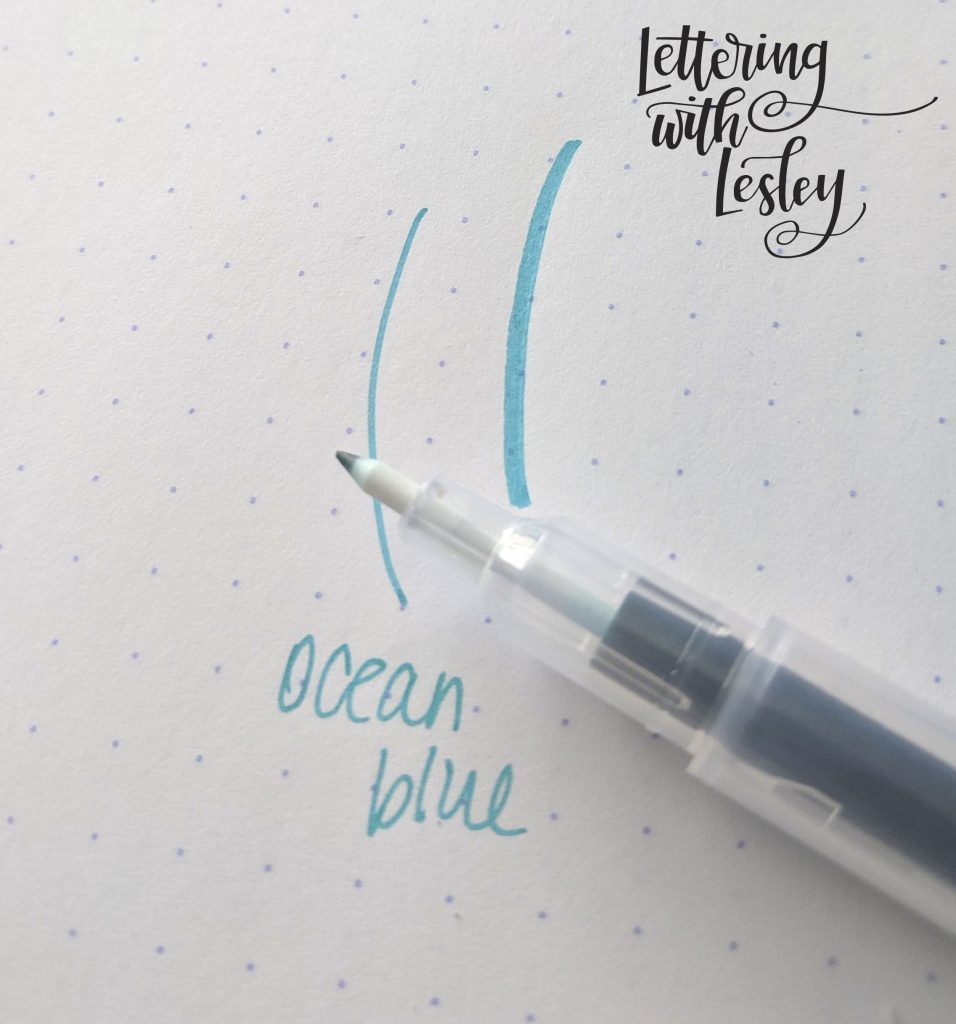 I don’t know if mine aren’t broken in enough, but I had a hard time getting a consistent line with the brush tip end (when used as a brush pen)!  It was really hard to keep pressure down hard and it wanted to pop up on me.  Also, it was a little wiggly, because I was struggling to keep it down.  The effort to keep heavy pressure definitely affected how smooth and straight my lines were. On a decorative note, the thin tip was also awesome of stipple with!  I really liked how consistent the dots were, but because they are tiny, it takes forever!

There are 48 colors in this set!  I think there is a lot of variety in the colors.  I would like a few more grays and browns in the set.  I think neutrals are super versatile in lettering for shading and adding details.  This might sound really crazy, but it annoyed me (a lot) that the colors weren’t in the order listed on the back of the package when they arrived.  For the record, the package lists them in color order. They were close, but not in order.  As I swatched, I put them into color order. 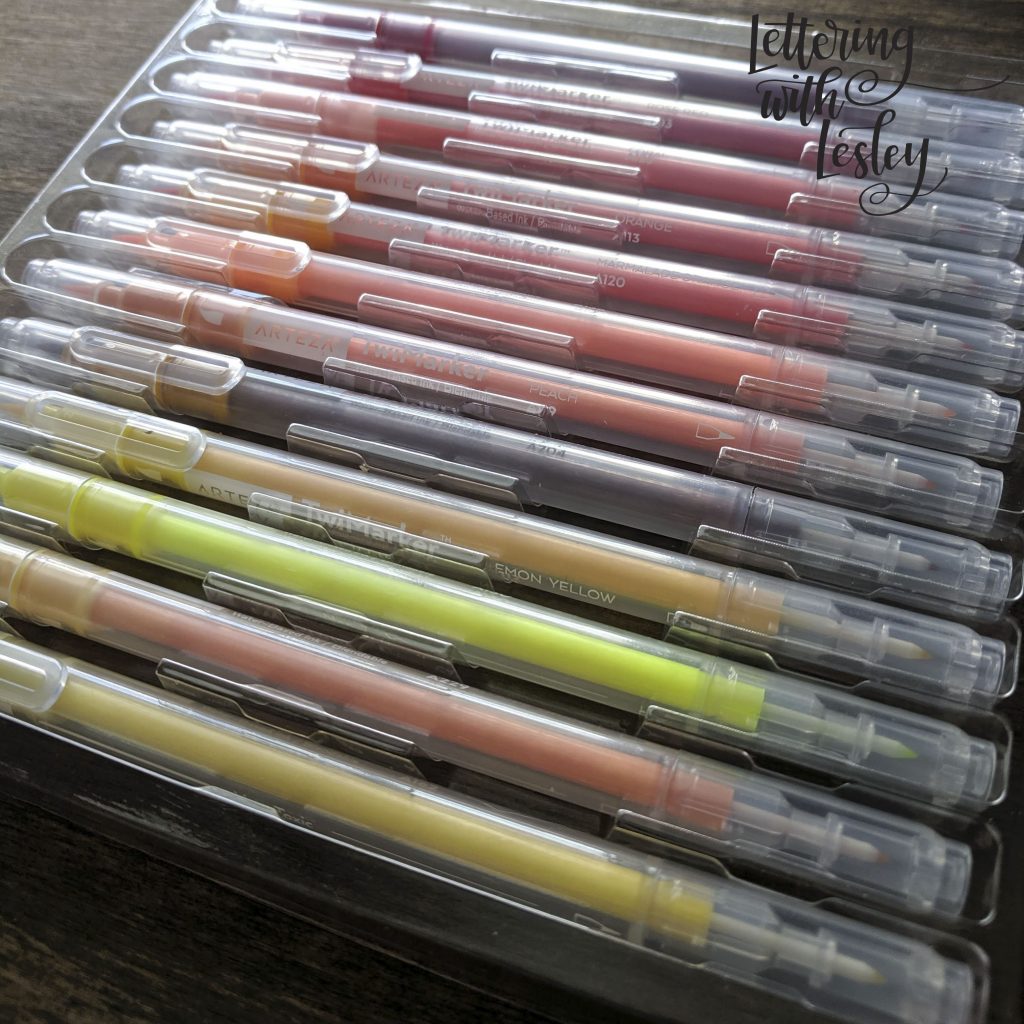 When I get a larger set of pens (think more than twelve), I like to swatch.  It is a lot easier to look at the paper and find the right color than trying to pick it out from the barrel.  I find that these Arteza pens are really hard to tell what color is what in the barrel of the pen.  The colors are really similar, but it is especially hard to pick out which ones are the bright neons. These inks are a water based ink.  You can blend them using a water brush.  I didn’t play around with this technique a lot, but I did have some success with a few of my trials.  Honest disclaimer, blending isn’t usually my jam.

When I was writing on mixed media paper, I found that they were not color additive.  WOOT!  When pens are color additive, they get darker as you add extra layers or go over the original ink layer.  This may sound crazy, but you can go over one section a second or third time (maybe cleaning up and edge or fixing an error), and it will NOT darken more than the rest of the letter.  Any place you need to do a little clean up won’t stick out like a sore thumb.  There was a very minimal color difference that I don’t think you would notice if you were not looking for it. 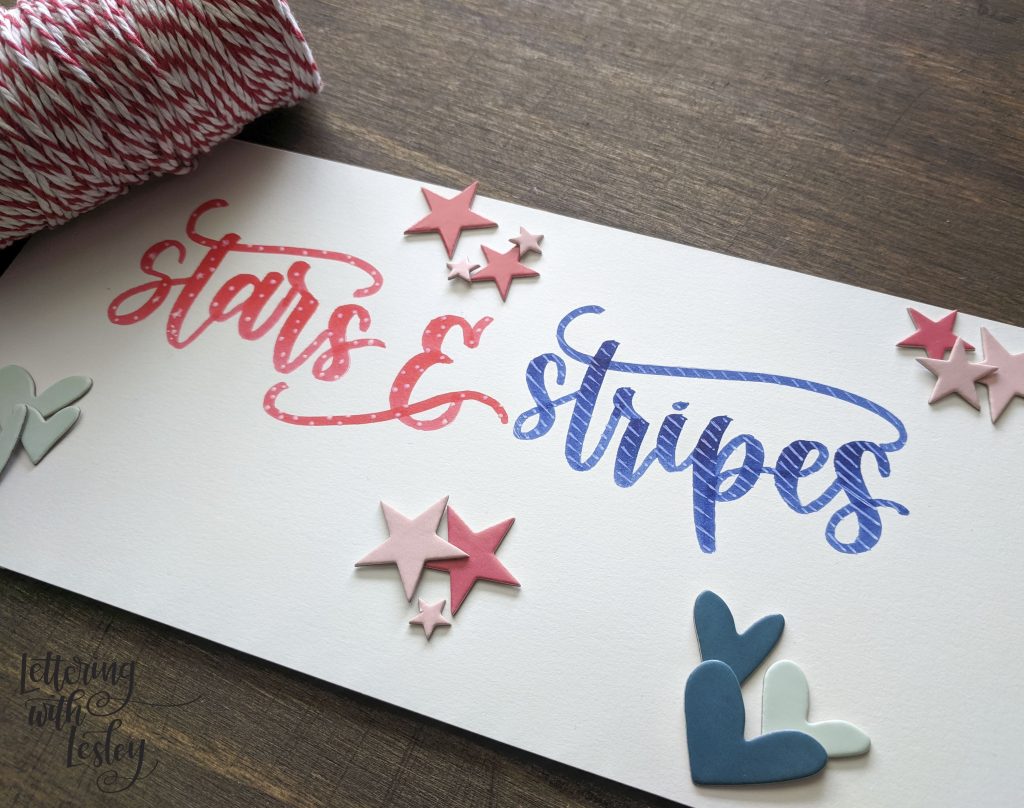 On the juicy ink scale of one to ten, I feel like this pen was a five.  It dried fairly quickly, but I did have some struggles with some smudging at the top of downstrokes.  All the pens have an equal amount of ink distribution – nothing was super runny.  The ink smudges pulled right up with my most favorite eraser of all time – the Tombow Sand Eraser.

These pens are pretty awesome.  I really liked the price point – I paid about $35 (with free shipping) for 48 pens, so the final cost is less than a dollar a pen.  And, when you add that it is a double ended pen, it is a super duper deal.  You can snag these sets of pens right here. 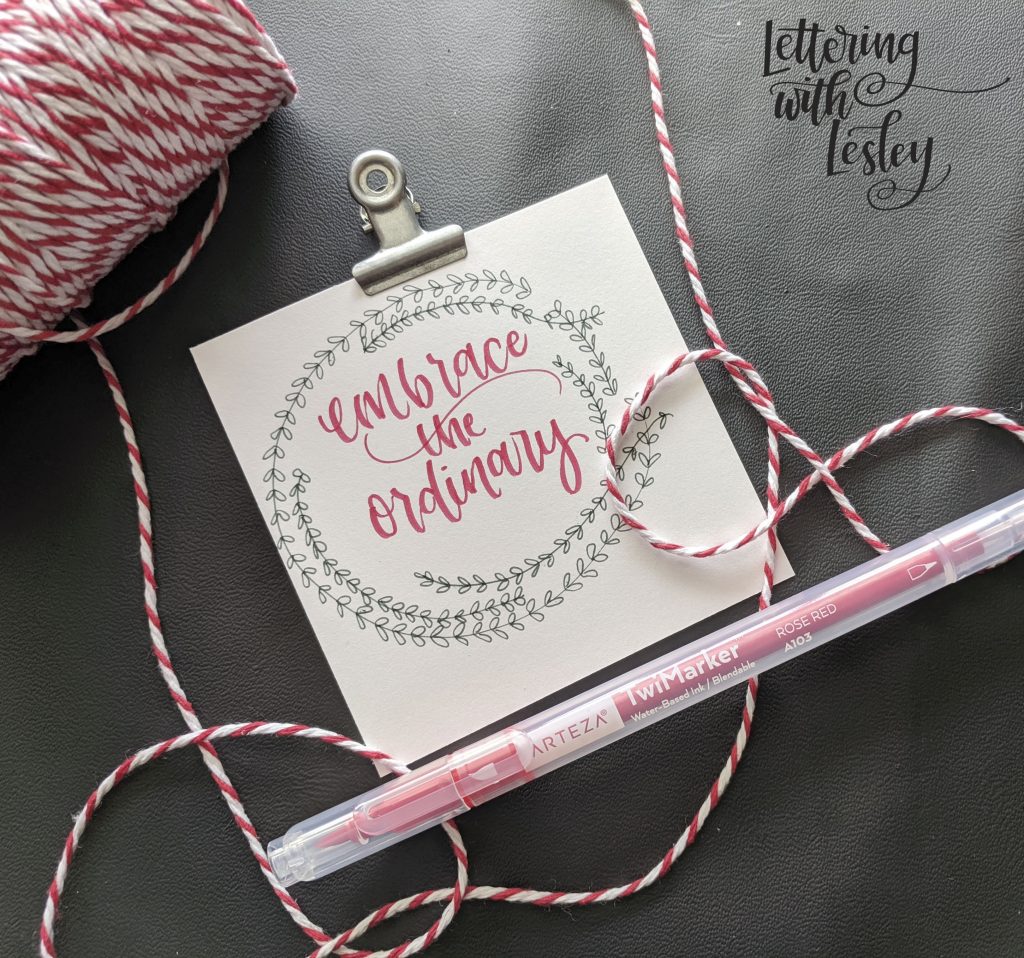 At the end of the day, I would recommend these pens to letterers with some experience.  I think they would be very hard to manage if you are a brand new letter.  These would also be awesome for my heavy pressure writers, especially the skinny side.  They definitely take a little work to push down and if you write with heavy pressure, you will get some super stunning lines from these pens.  If you have a set, I would love to see what you create with them!

Below, I have a video with a look at the pens and a little bit of pens in action in real life, with real lettering. 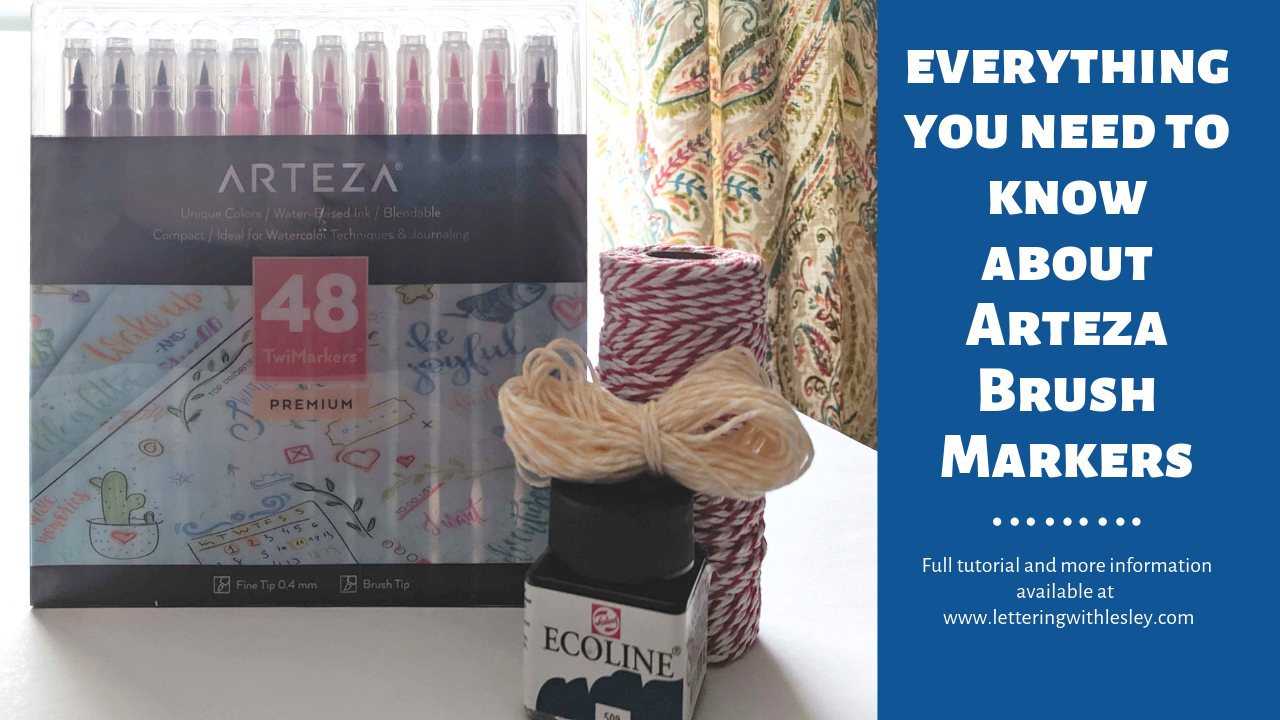 Go get your letter on! 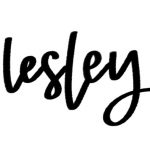 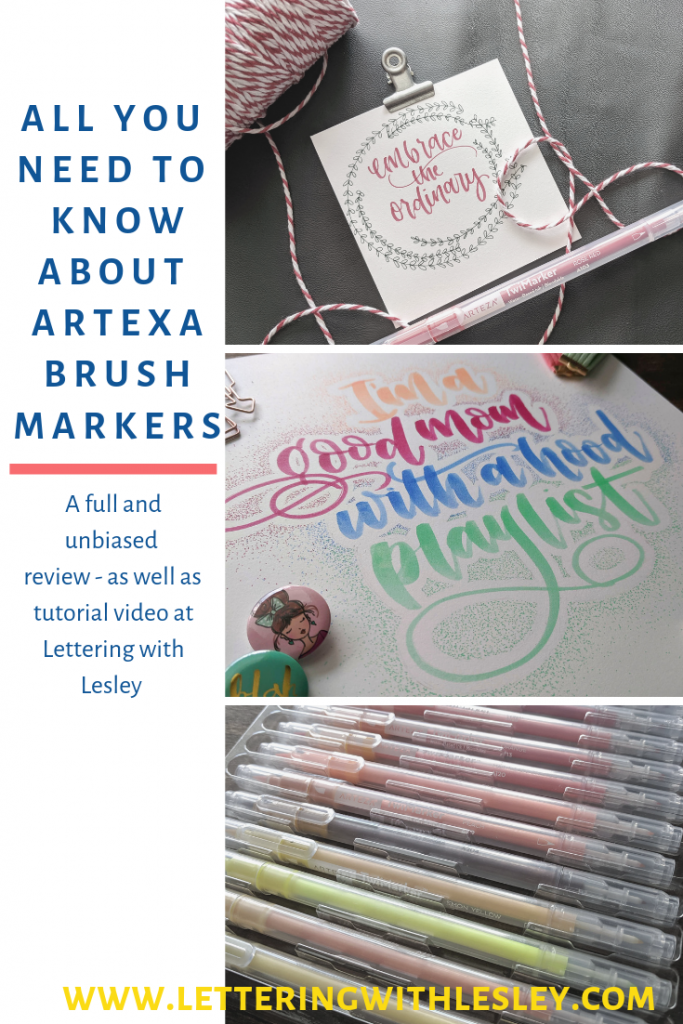 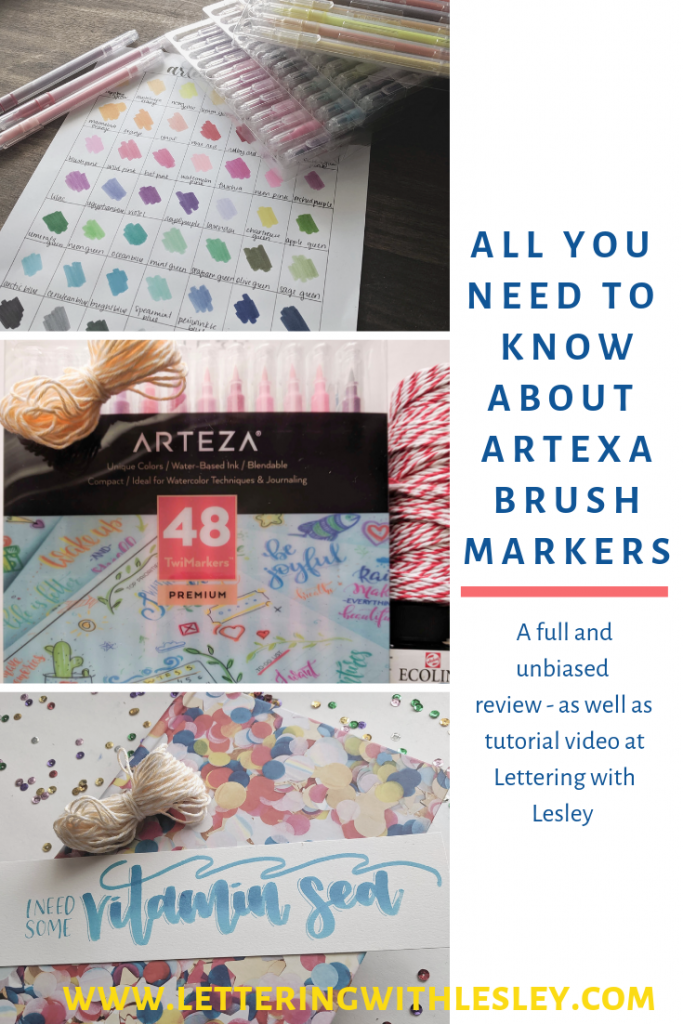 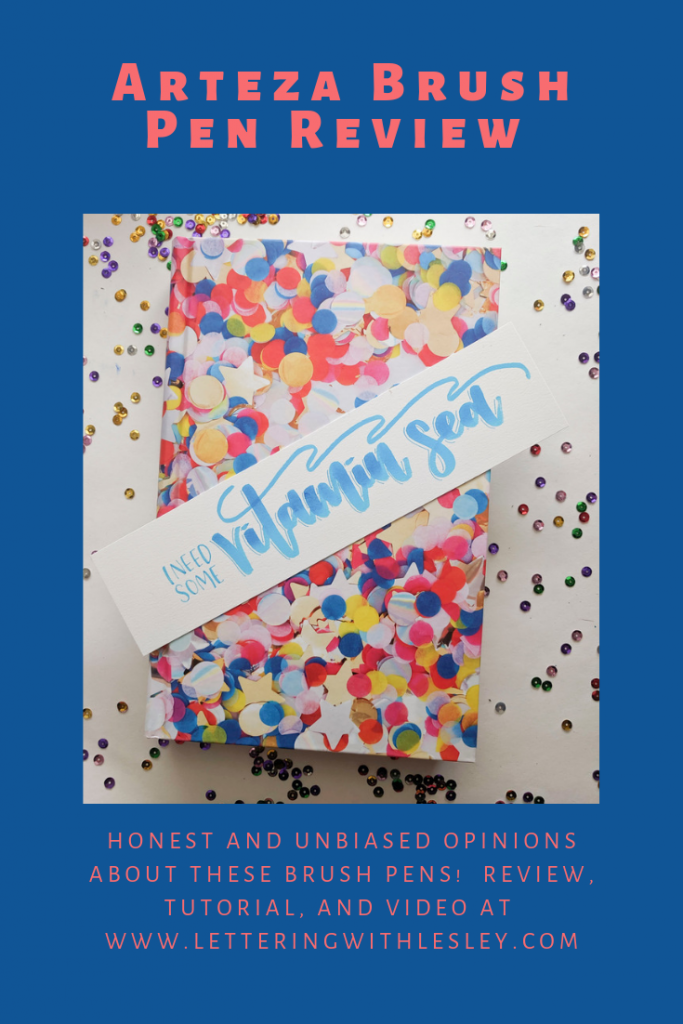 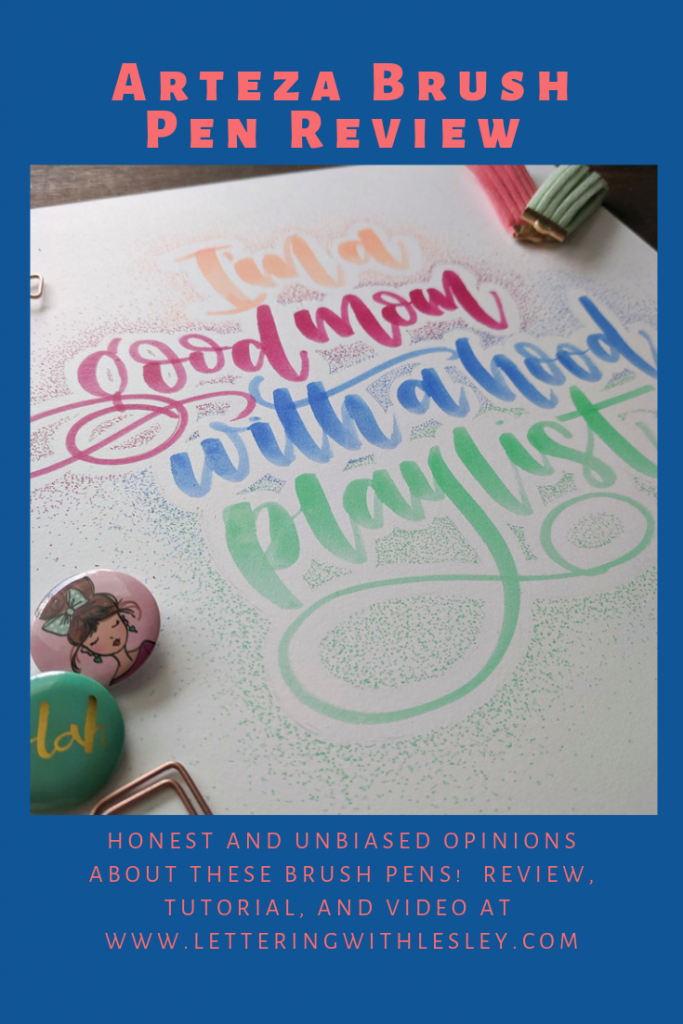 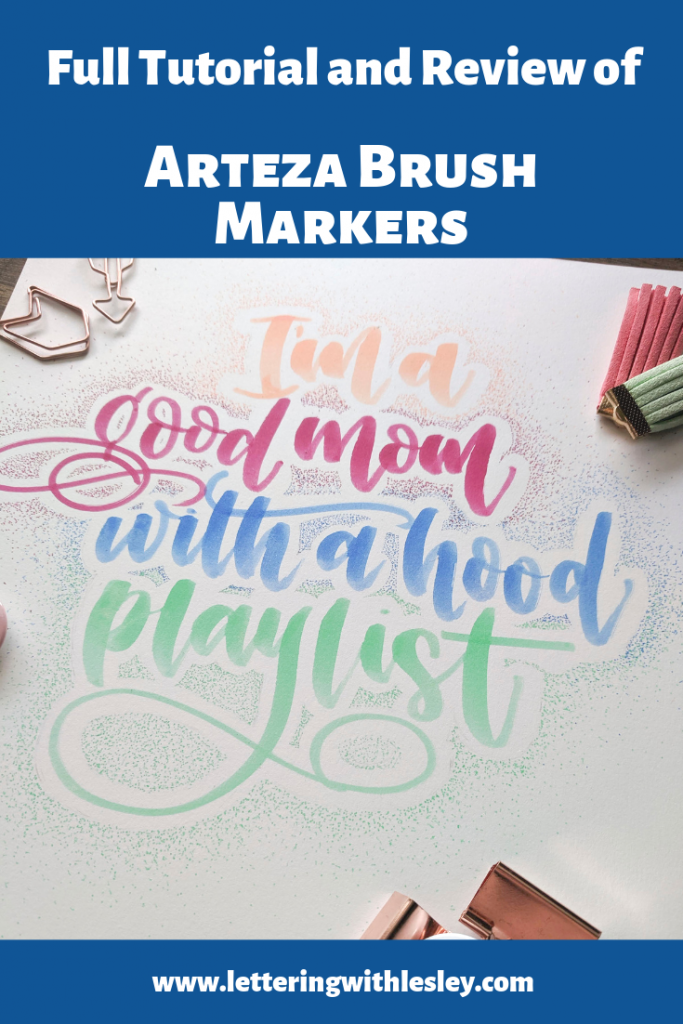 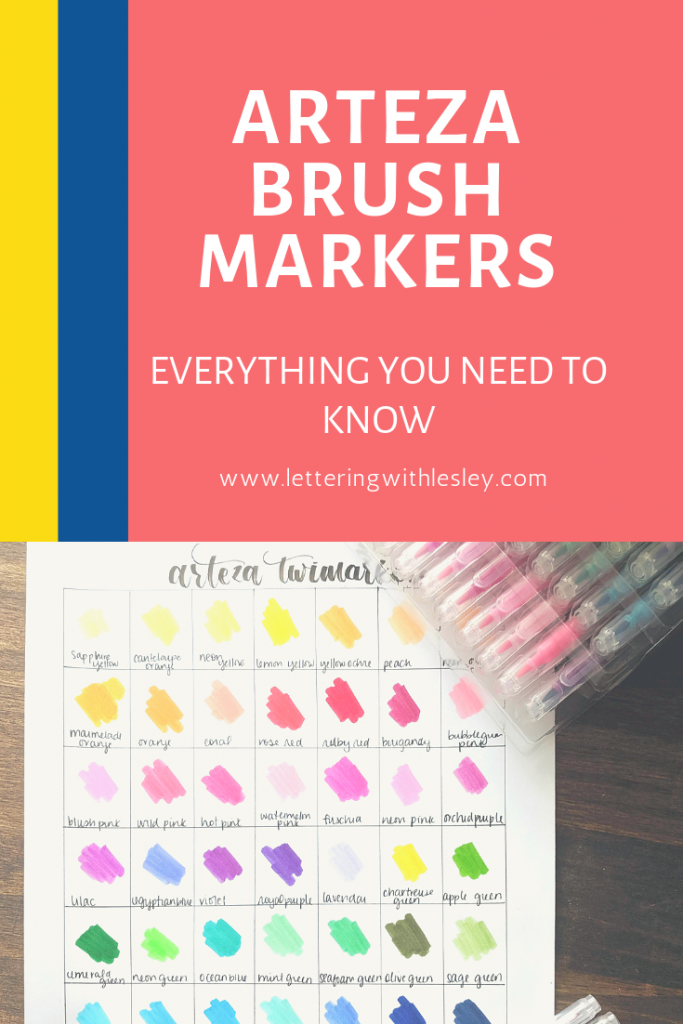 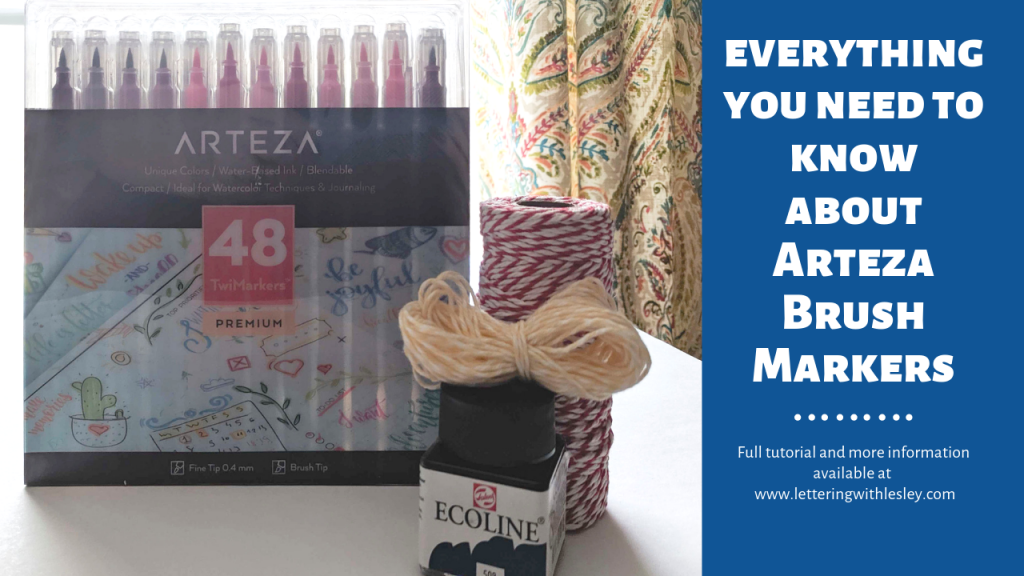